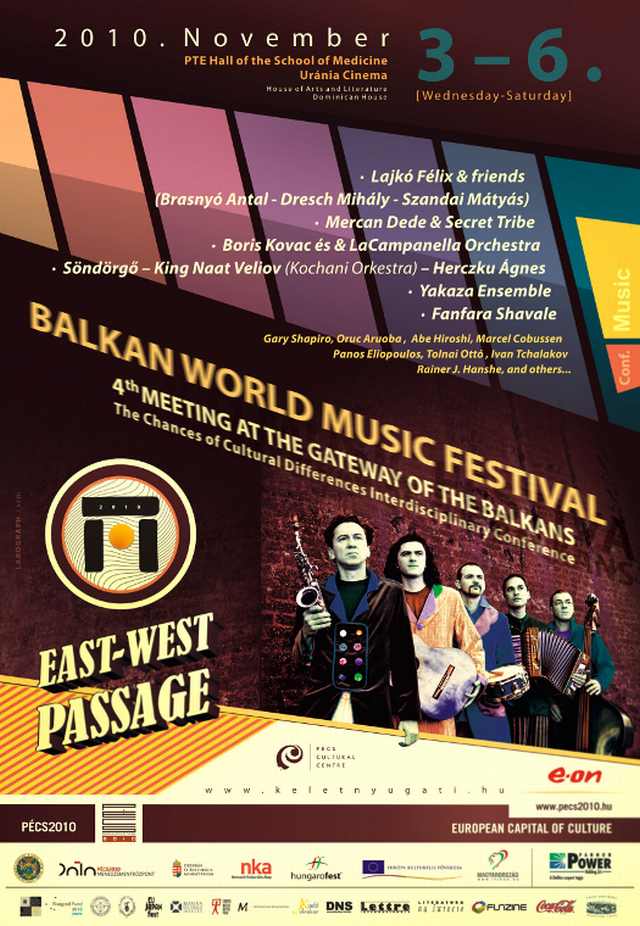 The East-West Passage project from 2007 to 2010 was aiming year by year to extend an ever-broadening perspective of the many-faceted culture of the Balkans. The two striking arches of this intercultural patchwork of world music concerts, art exhibitions, conference lectures and discussions were formed by the Balkan World Music Festival and the Meeting at the Balkan Gateway International Interdisciplinary Conference.

The full textual material of the Meeting at the Balkan Gateway International Interdisciplinary Conference  will be published in three volumes by the Jelenkor Publishing House (Hungary) editors: Kristóf FENYVESI, Katalin Veronika KASZNÁR and Jolán ORBÁN.

The  bi-lingual abstract booklet of the Meeting at the Balkan Gateway International Interdisciplinary Conference 2010 is downloadable: click HERE! (PDF)

June 4, 2010 - Art & Psychoanalysis Symposium in Pécs city, organized by the Janus Pannonius Museum and the BRUSEUM in der Neuen Galerie Graz. The symposium was held in the framework of the CROSSING THE BORDER – Der performative Brus exhibition with the personal participation of Günter Brus. 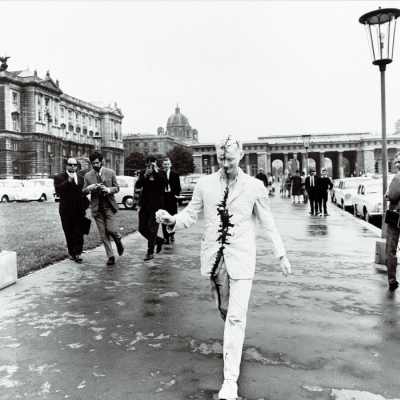 My lecture took place with the following title: Stranger in the Bildung – Border Crossing as Nietzschean praxis and the existential philology of Karl Kerényi.

I presented my researches under the title of Literature in Philosophy, or How the “True Friedrich Nietzsche” Finally Became a Fable? Download my slideshow from here (PDF, 2,4 MByte).

An interview (in Finnish) on the event and my lecture made by the Finnish Pohjalainen daily newspaper.

The Experience Workshop at the 4th Education and Practice Conference, Kaposvar University, Hungary

On 23 April 2010 the teachers of the Experience Workshop presented at the 4th Education and Practice International Educational Conference, Kaposvár University.

Presentations:
Eleonóra Stettner: Let the Maths be your awaited and favourite class!

Ildikó Szabó - Kristóf Fenyvesi: Innovative Games and Playful Innovations in the School, in the Concert and Exhibition Hall and Out in the Open-Air

A report by kultura.hu on the Experience Workshop - A Creative Day in the School for Teachers in the Institute of Education, Miskolc - Hungary (7 April, 2010).

With the title of "The Foundational Questions of Science: Why do we do the things we do?" the Finnish Graduate School for Russian and East European Studies held its Spring Seminar on 15 April, 2010 in the Aleksanteri Institute (Helsinki University). 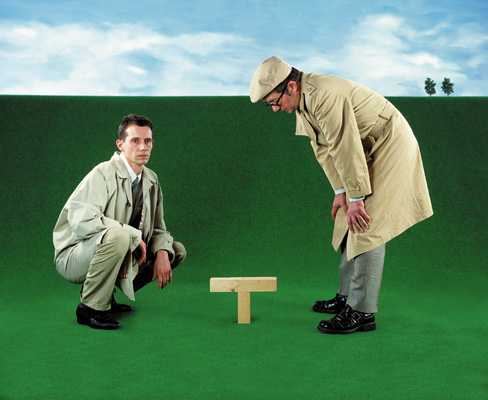 Gábor Gerhes: The Discovery of the T

Kristóf Fenyvesi in the workshop session presented his researches under the title of "Body - Epistemology - Interpretation: Why Nietzsche did what he did?".